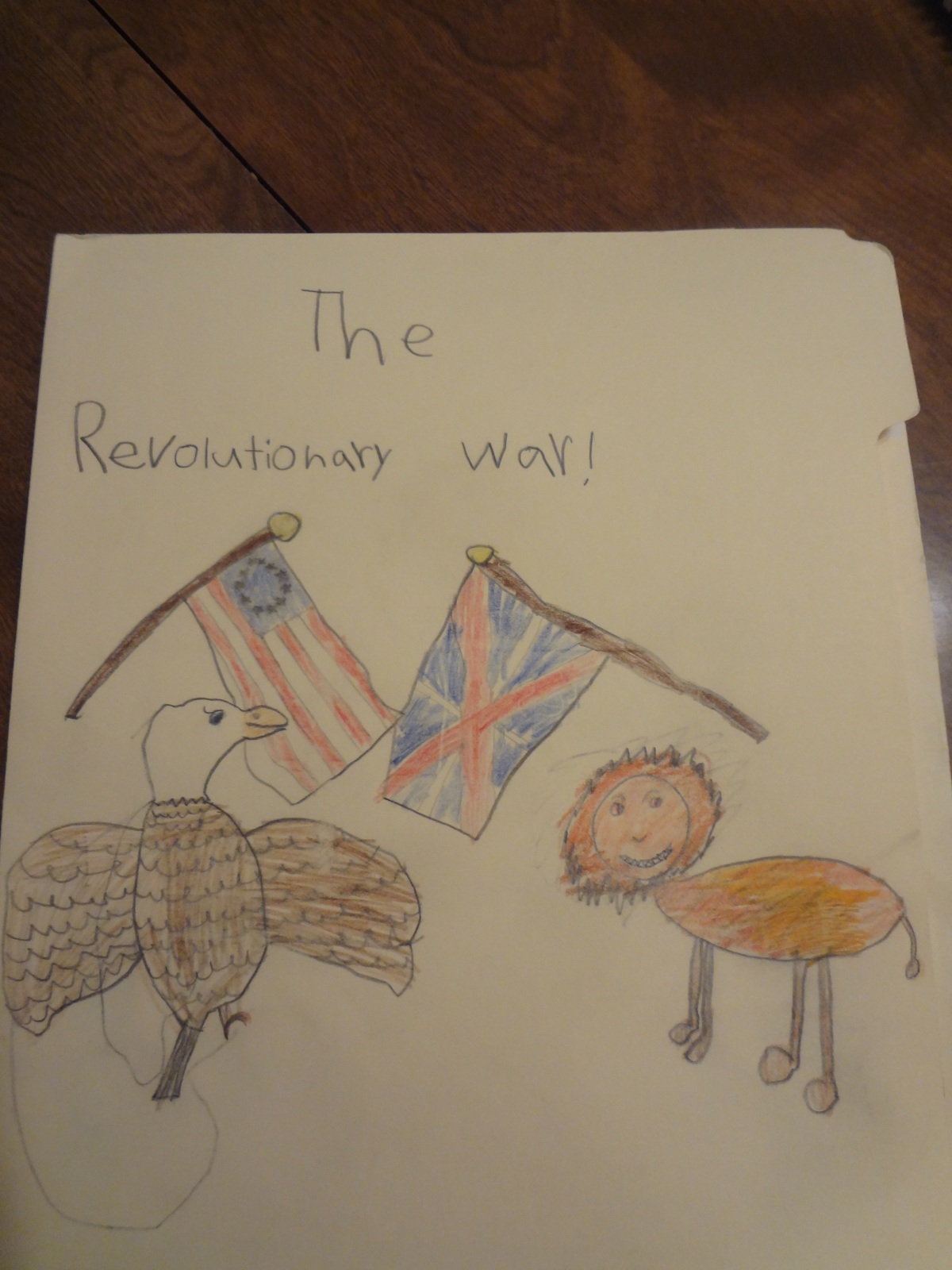 I am going to skip all of the possible avenues we could explore with tests and their usefulness, lack of usefulness, test anxiety, accuracy, validity, Common Core testing (that one could get an entire blog post which I will NOT write), etc.

And no, I do not help them with their tests. Someone in the public school system asked my daughter if I helped her with her tests once and I wrinkled my nose and silently questioned the motivation behind that question.

We do spelling quizzes twice a week. Like I mentioned before, I’m not so thrilled about our current spelling situation. That same educator who asked my daughter about her tests also recommended a spelling website the district uses that I’m going to try out. It looks promising and I am hopeful.

There is also a quiz at the end of each Latin chapter in our book so every Friday is also Latin Quiz day! Yea!

Other than that I do not test my children. Instead I look for evidence of their understanding in subjects and topics in how they ask questions, use their knowledge in their daily lives, how they play (my kids have been known to play Captain James Cook and Lewis and Clark in the backyard!) and what sort of things they are excited to tell their dad about when he gets home in the evening.

For bigger units and topics we often do some of the following;

Lapbooks: a lapbook is essentially some sort of folder decorated on the outside cover – you know, like a book – and then filled with little mini-books filled with facts, stories, bios, geography, dates, whatever, relating to that broader topic begin covered. Let me look for some photos of our latest lap books. We made some for the revolutionary war. (We also spent 7 or 8 weeks on the American Revolution.) Lapbooks take a lot of time – all that coloring and cutting and gluing – so I don’t really like to do them unless I am going to take a lot of time on that particular topic anyway. OK, photos as promised. Also check out this blog for most of your lap book needs. 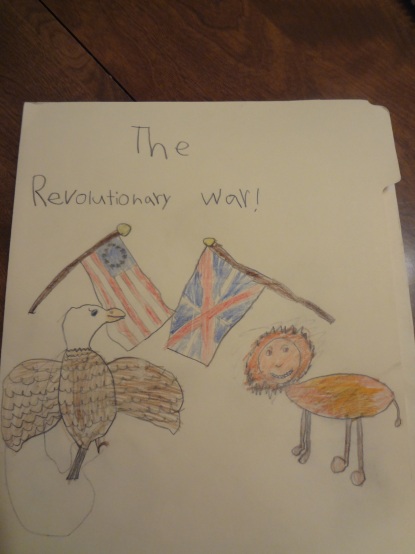 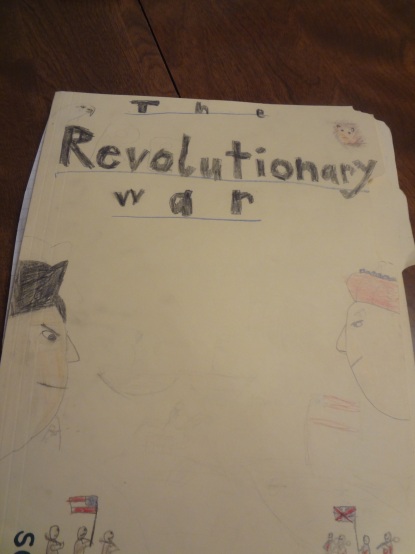 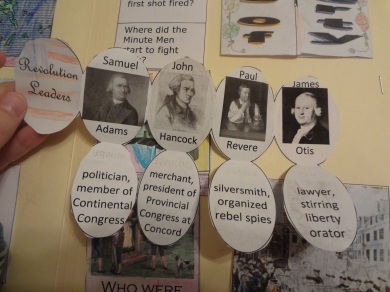 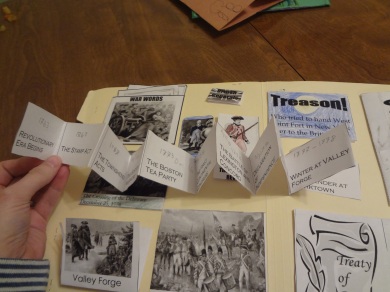 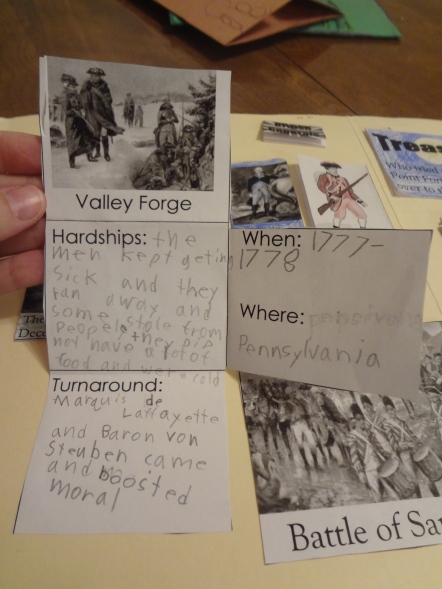 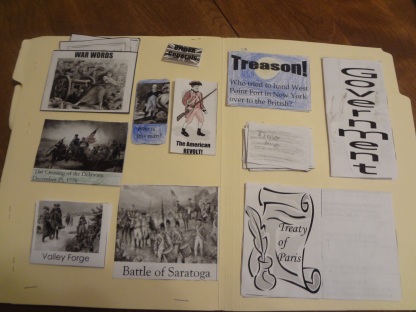 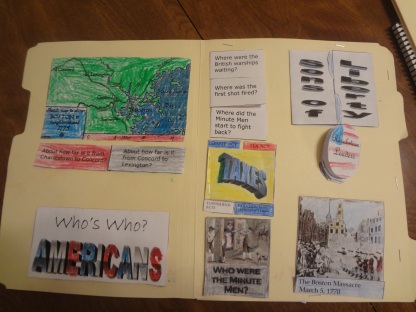 Board Games: I’ve only done this once, with Captain Cook, but the children loved being able to play their own games and it was clear that they understood the history and the adventures of Caption Cook as they had to essentially outline and timeline them onto a bunch of little squares maneuvering around a poster board. 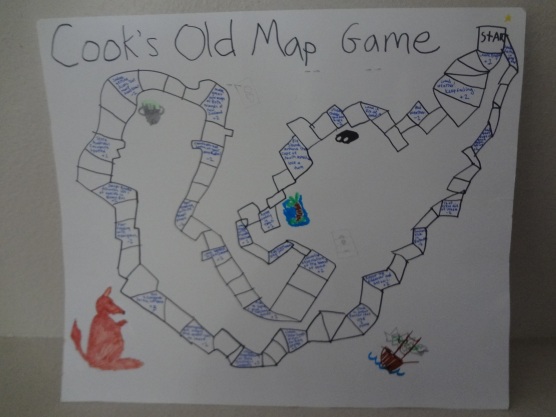 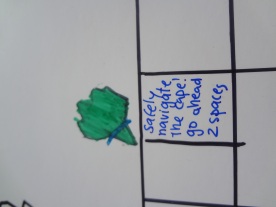 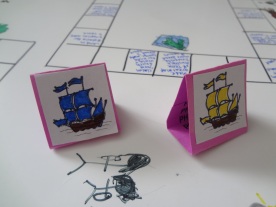 Book Report: I tried to get my kids to do book reports last year. Total fail. However, as we start getting more and more into writing and rhetoric, I can see how these will start to work out better. Plus, 2nd grade may be too young to expect a lengthy report on character development, plot,setting, theme analysis, us of various literary stylistic devices, etc. At least the way I was anticipating it. Still, I feel book reports have their place. Just not in my early elementary ed.

Creative Book: THESE beauties can easily take the place of a book report for the younger kids. And they are fun and the kids want to keep them forever because they are proud of what they have made. I found these books at a local homeschool conference a few years back. We don’t use them everyday. In fact I don’t think we have used them once this year. Maybe once. But I still feel they are well worth the money I spent. In fact, you may want to just check out her blog here. There are a set of books themed around “Spectacular Books,” that you can easily make with basically paper and scissors. 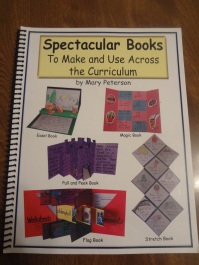 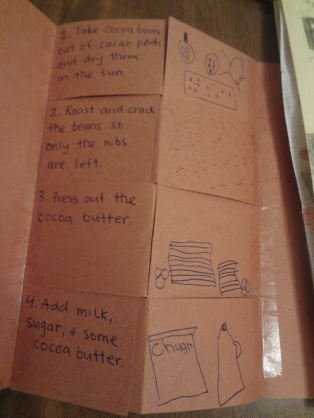 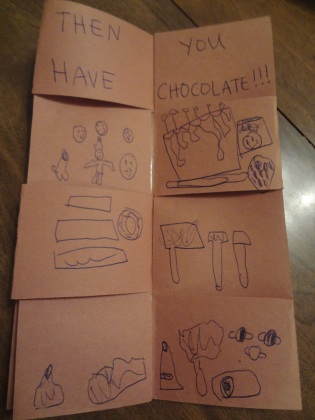 Walk/Adventure/Hike Discussion: Remember our Lewis and Clark Expedition? As they walked along and pretended they were Lewis and Clark on their way west they recounted so many details that we had read about in our books and discussed at home. They remembered the different Native American tribes, the names of the forts, the trails, the joys, and that the weather at Fort Clatsop was “wet and disagreeable.”  Being outside and exploring and talking together really got their brains going and it was very clear they had understood the subject matter. I would see this working best for earth science and any exploration type of history, but I’m sure you could “test” your child’s knowledge by having a fun discussion during any sort of nature walk or hike. It is a special time when we are happy, in the fresh air and sun, and enjoying one another’s company. The conversations are usually free and honest. 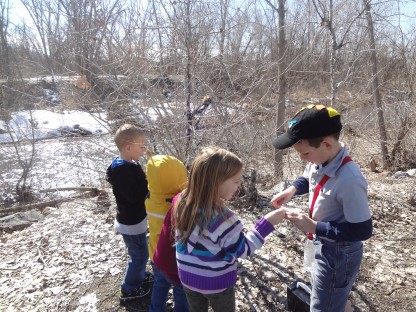 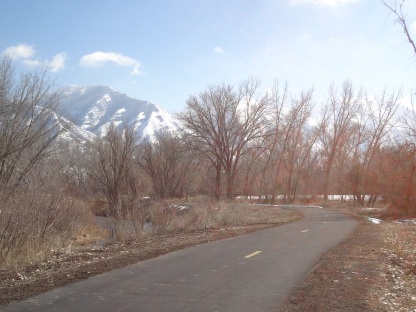 Theater/Movie: We’ve never done this but I probably should because it would be hilarious. Have the kids make up their own script? You’re going to know pretty quick how much they got out of their lessons.

Play/Re-enact: This is different than making a play or a movie because it is totally off the cuff. Like I said, my kids sometimes play historical scenes out in the backyard. I remember once they made the city of ancient Baghdad out of legos and had Dora Little People in their House of Wisdom translating texts from all over the world. Strange maybe? Yeah, maybe. But when I can see them play what we are learning about I can see what level they “got it.” I don’t need them to write anything down.

Scrapbook or photo album: This would just be like a lap book but without any or much writing. The point being that when they show off the photos of the books they’ve read, the projects they’ve done, the experiences they’ve had, they can tell you everything about it. The photos and scraps (ticket stubs, a flower from their hike, anything really) will be the prompt and remind them and then they can let Grandma or Grandpa or Dad know why all of those things are significant to the topic studies.

Bag Full of Stuff: We did this last time we did state history. I just bought little bags from the dollar store and as we learned more about our state we filled up the bag with an item representing each thing. A rock reminded us about the tallest mountain in our state. (We also had a golden nail and some salt and a penny if you want to try and figure out where we live.)  The idea was the same as the scrapbook/photo album. The items they pull out of the bag act as reminders and prompts as they are showing other people what they have. I don’t have pictures of our last bags because it was so long ago and the photos are hidden on an external digital storage device somewhere in my not-so-organized nightstand. So basically I am too lazy to go search for it and try and find the photos. Still, you’ve got imagination. You’ll figure it out if you want to.

Spy Bags: I’ve never done these either. But it would be a less messy variation on the “Bag Full of Stuff.” Check them out here if you haven’t heard of them.  Just use educational prompts for the I spy stuff instead of cute little buttons and toys and whatnot.

Posters: We’ve made posters about the rock cycle, the water cycle, atoms, etc. This one shown is our current project. I decided since there are so many Native American groups we would be talking about in the next little while (Lewis and Clark – how can you learn about them without learning about all the nations that made it possible for them to succeed, our own personal state history has 5 major Native American groups, The Trail of Tears is coming up for us too in a few weeks, plus I have a friend who has spent time with the Iroquois and she will be a quest speaker for us at the end of the school year) so we are making a poster/table to compare and contrast what we learn about the different nations. It is easy for little kids to lump ALL Native American groups into one big culture. And even though geographically related groups have many similarities, there is a lot of diversity too! So anyway, in any poster like this your child can demonstrate what he or she has learned – and its fun to present it also. They could give a presentation to Grandma or Grandpa or their babysitter or something. 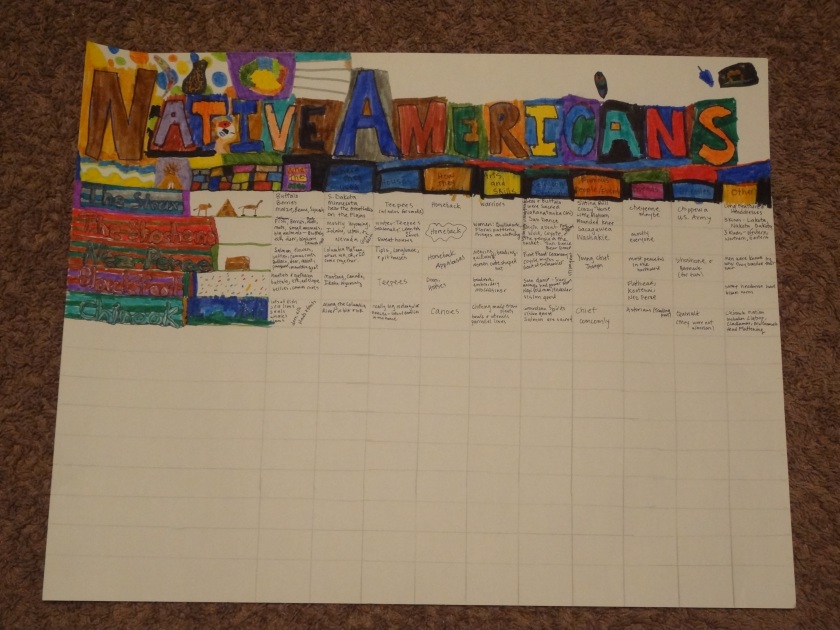 That’s all I got right now. Let me know in a comment if you have something you’ve done that has worked really well. Or you can lecture me about how I really should be testing more. I’m not above learning knew things and changing my ways.